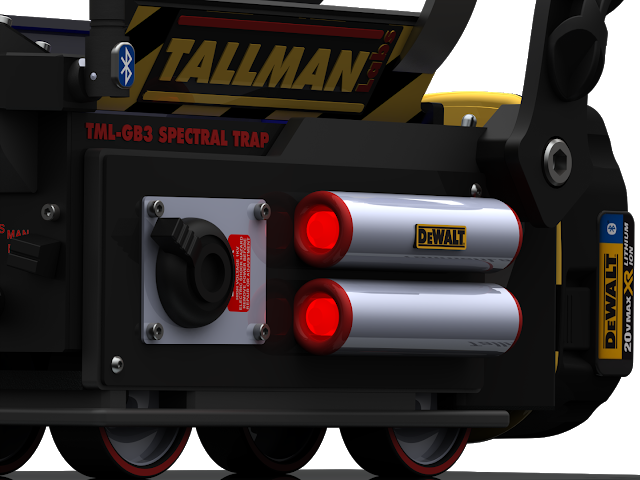 I must admit, I have never had the urge to recreate prop costumes or weapons but, the Ghost Trap had an interesting application for me, which I will go into at a later date..

Recreating accurate props is not a light undertaking, as I soon discovered modelling a 1:1 scale model of the original Ghostbusters trap, for an undisclosed project. I started off fairly light hearted, estimating my ability to make the actual prop but, underestimating the scale of the project!

If you have ever watched tested.com you will have realised they are pretty crazy about movie props. Tested often releases content regarding the making/ recreation of actual film props. Some of the more iconic props featured being, Deckard's Blaster from Blade Runner the "2019 Detective Special" (one of Adams favourites) and The Aliens Motion Tracker & the Ghostbusters Trap .

What started off as a 'near enough will do' and 'I just need the essence' attitude, turned into a full research project, gathering all the most realistic dimensions and materials I could find for reference. I found myself now trying to recreate the original ghost trap as accurately as possible! With the imminent release of Ghostbusters 3, next year, it captured my imagination... how might a future modern version of the ghost trap actually look?

A rescued film prop for the original Ghostbuster's 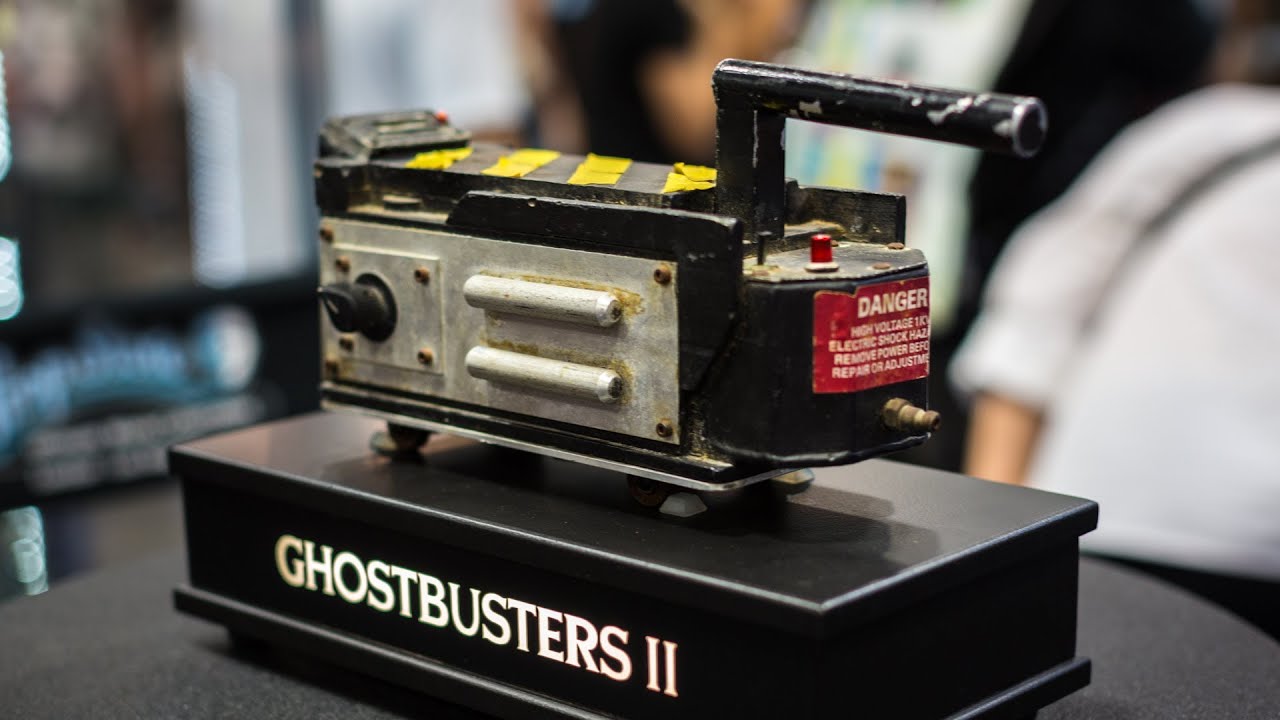 (Image courtesy of the Prop Store)
A rather fresher looking film prop... 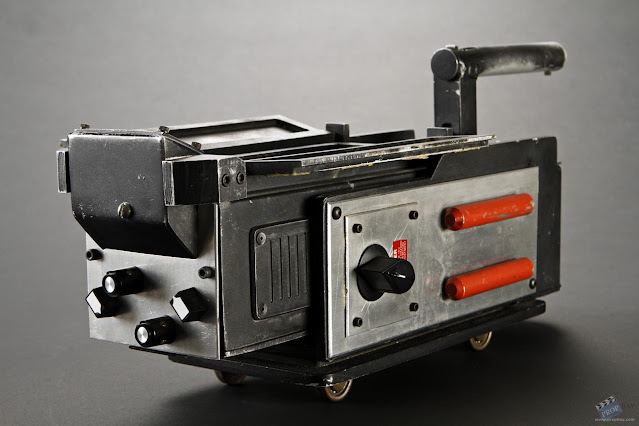 Hey, its a tool! So lets bring in the big tool names... Originally, I was going use Bosch or Makita for the theme, as I have these tools to hand for reference. I gave it some further thought and came to the conclusion it's just something those companies would never consider.
However, the warning tape on top of the original trap, kept bringing me back to DeWALT's trademark yellow. Decision made, DeWALT. Just to note - DeWALT being an American company, seemed a little more Hollywood than the more reserved Bosch and Makita! 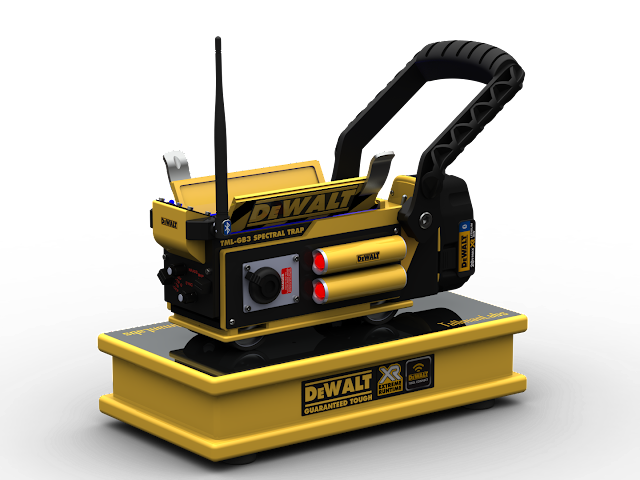 The year will be 2016... there's not going to be a cumbersome pedal to operate it. Let's go lithium polymer battery pack and activate the trap remotely. Through some strange coincidence, DeWALT has just released a tool range called "Tool Connect" which, allows you to connect to your battery via Bluetooth and perform various functions such as, checking of charge levels, as well as many other remote functions through a phone/tablet application.

Before any of you 'naysayers' mention the viability of wireless control to a crucial device such as a ghost trap, yes I realise, with all that electro magnetic interference (EMI) it would never get past certification for field use, yet marketing would love it :) 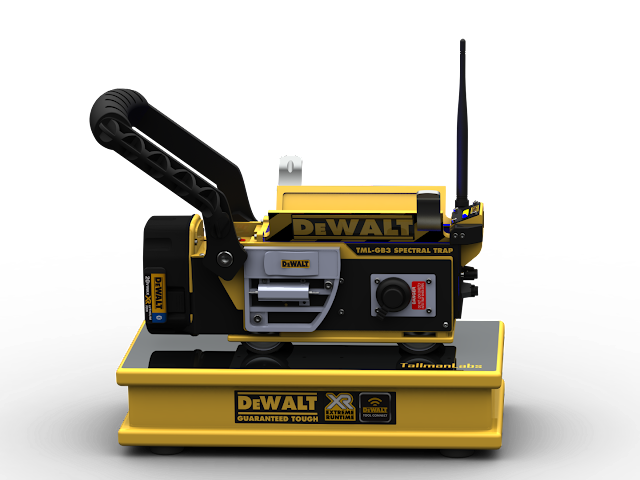 I wanted to keep the appearance of the original trap as much as possible. The main body style and dimensions are left unsullied however, there are so many American muscle car shows on TV I just had to "rim it up" in wide "blank" style alloy wheels with low profile Redline pin stripped tyres.

After the distraction of designing the concept, going back to modelling the original GB1 trap, the appearance seemed quite bland. The "interesting application" will keep me motivated to complete my so called 'quick' project ;)


And at least I got a snazzy 4k wallpaper out of it... if nothing else! 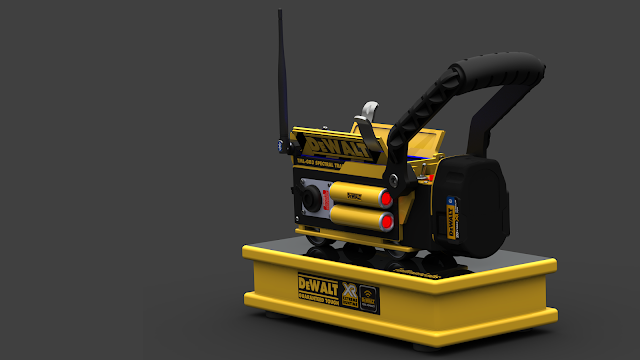 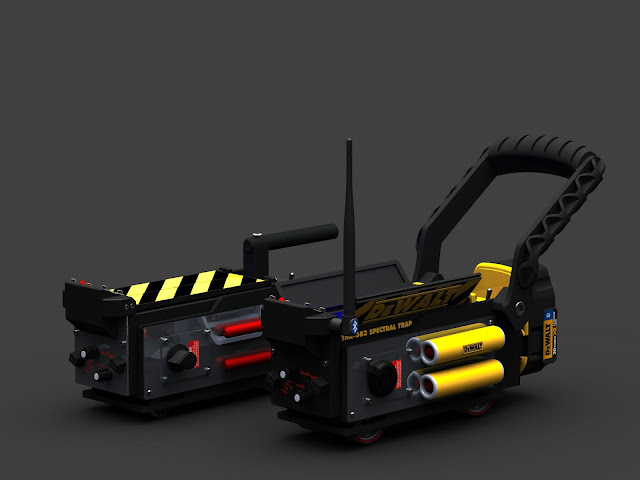 You never know, I might just make the TML-GB3 one day...
Below: A very experimental Ghost Trap Light/Sound effects prototype on breadboard :) 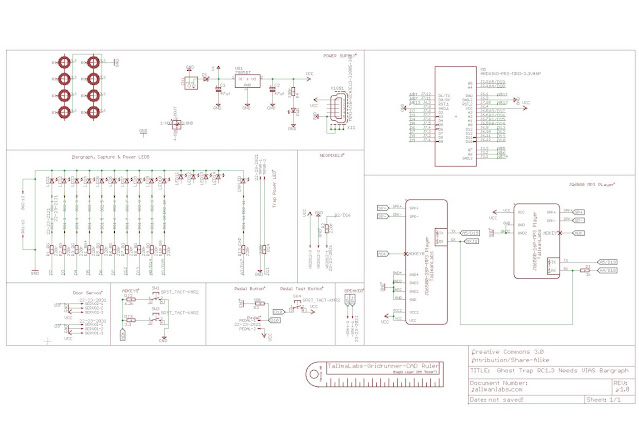 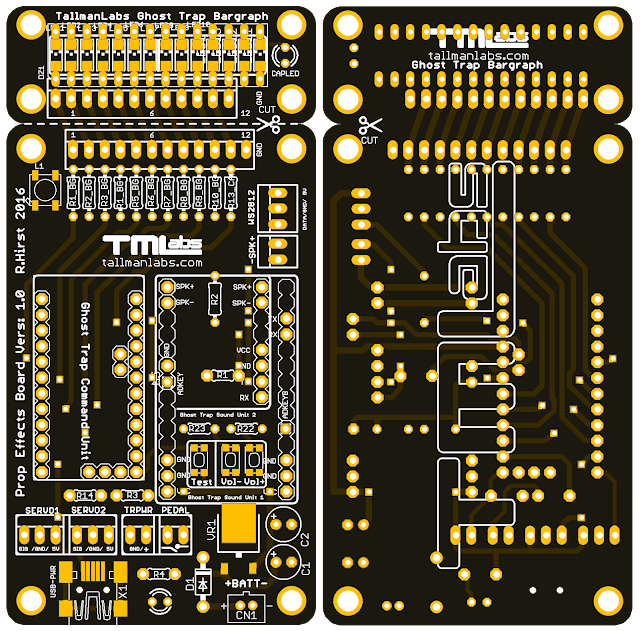